It’s now been a full two years since I took the plunge into the leathery abyss of amateur shoemaking. It was indeed a small step for mankind, but a giant leap for me.

In September of 2017 I had just come off reading Handmade shoes for men, as a coffee table book read by a layman. I somehow stumbled upon Andrew Wrigley’s youtube series ‘How to make a shoe by hand‘. That series really hit the spot – it was precisely what I needed to muster confidence to take the dive myself.

At the end of the video series, Andrew’s message was “Now you go do better”. I really took that to heart. With all respect to Andrew Wrigley – clearly, going out into the world and ‘doing better’ was not impossible. Hard, but not impossible.

Since I started out two years ago, I’ve made 14 adult shoes and 3 baby shoes. In addition, I’ve made a multitude of other leatherworks, including 3 handbags, several hand sewn and tooled belts, guitar and bass straps, trivets, coasters, gift boxes, etc. This pace has been very satisfactory, and I wish to maintain it.

Stockholm was the pair I had just completed when I made my One Year Review. Shortly thereafter, in october of 2018, I made and finished Natalia:

Natalia was made for my niece, the first child by any of my four siblings. With a EU size of 21, I was hoping my niece could wear these shoes around the time of taking her first steps.

Natalia was made with my favorite veg tanned baby calf – used for uppers, lining as well as lasted toe puff stiffeners: 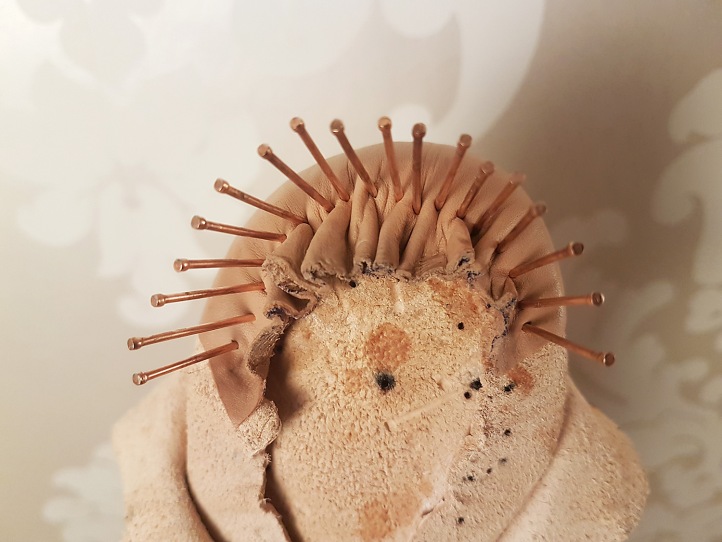 After making shoes for my niece, I decided to make some for my fiancée. Lisa was made in utmost secrecy, worked on only when my fiancée was not in the house. She never suspecting a thing, and this pair was born as her main Christmas present in 2018. 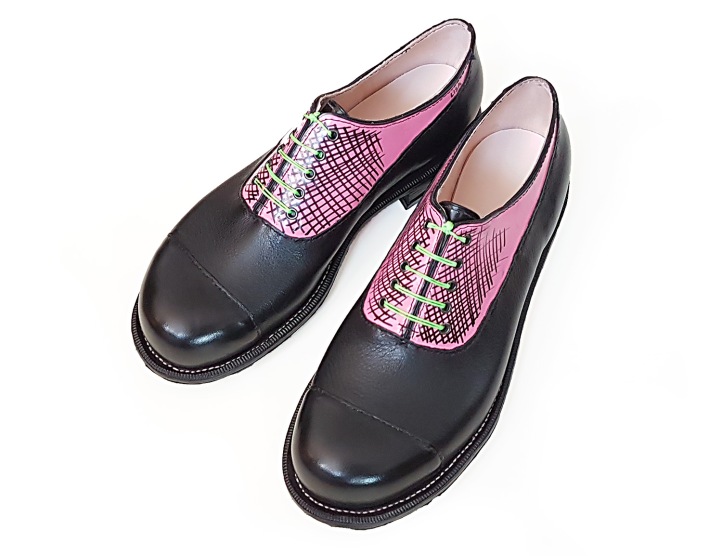 Making Lisa was a real trial. The secrecy part was fun and not that hard, seeing as how my workshop functions as a man cave of sorts in the house. As written about here however, I had to reverse the shoemaking process and throw the shoes in hot water to reverse the lasting. I ripped off the existing toe caps after they had been lasted with stiffeners and all, and exchanged toe caps on the uppers. 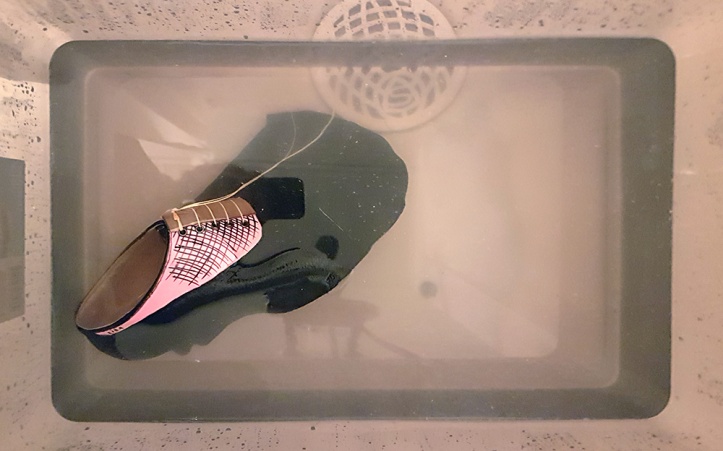 In space time, that was neither great nor terrible, but psychologically, it was an ordeal that really set me back for a while, and made me temporarily lose heart.

After Lisa, it was time for a pair for myself. Thus came Gotham.

The leather of Gotham’s toe caps and heels was the same leather that I first tried to use for Lisa’s toe caps. It was a super shiny Italian brush-off calf, and it would just not be lasted without adding warm water. With the addition of warm water during lasting, it worked fine.

Then came Augusta – a deerskin spectator in white and dark brown.

The season was almost spring. Augusta was finished to stand on grass when snow was still covering the vast majority of my lawn. In the picture above, the shoes are placed on the one spot of grass that was visible, while the rest of the garden looked like permafrost. Little did anyone know then, that Tiger Woods would go on to win the Masters of 2019.

The deerskin was too soft to be ideal as uppers, but I took my outsole game to a new level with Augusta. Here’s the bone-folded fiddleback and hidden outsole seam:

I then made a pair of Infant sized oxfords for my nephew, Ivar. They were made in the style of the father’s shoes, Gefle. 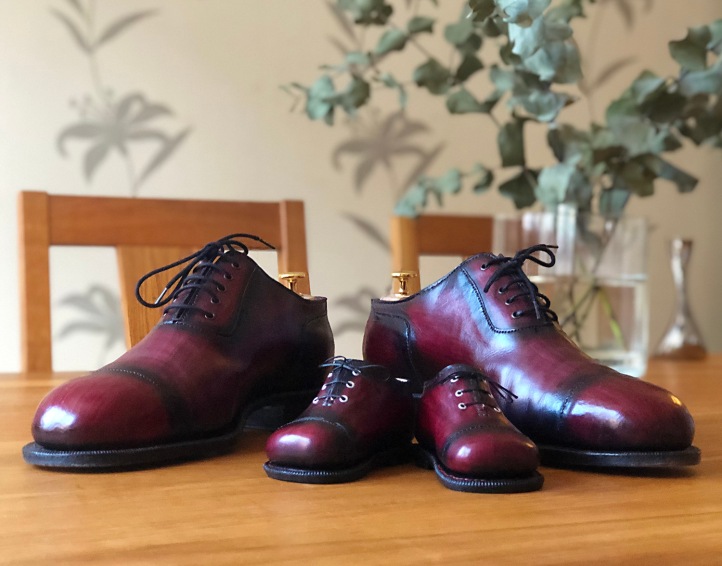 Vegetable tanned baby calf, hand painted with Fiebing’s leather dye. It’s very fun to make baby shoes, and way quicker than adult shoes – even if they are made with basically the same techniques.

Kirby was an experimental shoe. I made the pattern on my own last, but failed to spring the pattern properly. Having cut out and hand sewn the uppers, I pulled them over another pair of lasts as a trial. I was very happy with the quality of the making of these shoes, although the last shape is rather blunt.

With Kirby, I was very happy to use proper welting leather for the first time:

Using the same madras textured pink calf as uppers, in my summer vacation of 2019, I finished Upsala. I had planned this shoe in my head for quite some time, and now it would finally see the light of day. It was made in pink with black toe caps, to resemble the style of Uppsala castle. It was the first pair I’ve made that wasn’t 100% hand sewn, as the uppers of Upsala were sewn on a Singer 29k from 1910.

Shoes or castle? It’s hard to tell which is which. 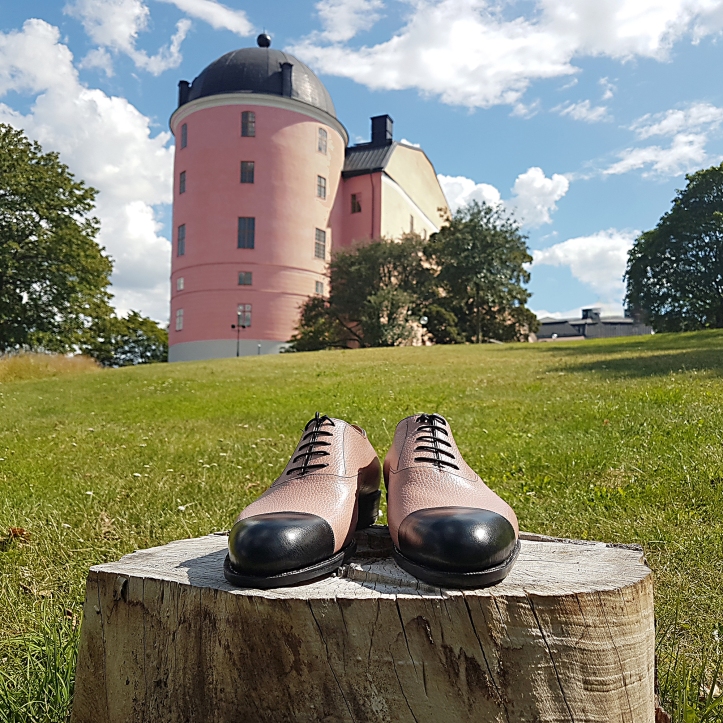 Upsala was also the first pair that I filled with cork bottom filler, having previously used only sheet cork for the same purpose. 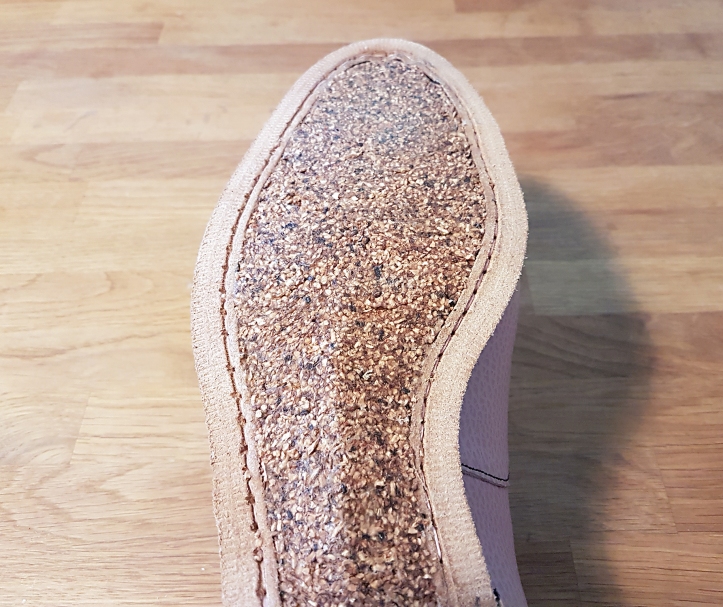 Using the same pattern as Upsala, Aros was made, in a beautiful historical brown. 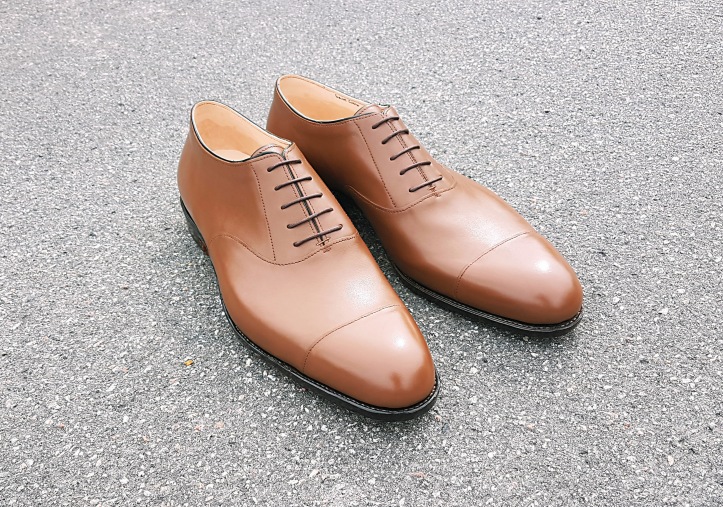 With Aros, I used a new method for the shank and heel area, as shown below and written about here.

Complementing Augusta, Augusta Jr. was made in Infant size.

Despite being an infant sized shoe, Augusta Jr. has taken my outsole seaming game forward. Here’s an image from doing the hidden outsole stitch:

At the outset in 2017, I set a goal that was rather quickly fulfilled: I was determined to make at least one pair of shoes that I could walk around in. Within two months, without any tutor or course – just with the internet and books – that goal was completed.

In the fall of 2018, when a year had passed, I set some new goals for the year that was then to come. The first goal was vaguely worded: to “keep getting better and hone my skills”. That follows automatically by just continuing in the craft, so while it has indeed been completed it was also kind of a cheap goal. Slightly more clearly stated, I also did set out to “keep up with a similar production pace” as I had kept during my first year. That goal has been accomplished.

My ultimate goal is still to sell the production of a pair of shoes for fair wage, and it is still not a goal I feel like chasing too hard. Writing this, I still haven’t put any shoes out for sale. Maybe I will in the coming year, but maybe I won’t.