Disclaimer: This post contains an old attempt at shoemaking, during the beginning of my journey. I really didn’t know what I was doing at this time, and the post is left online for archive purposes only. Please do not “learn” anything from it, as the post is certainly riddled with mistakes. It’s just a documentation on some of my thoughts as a beginner in this venture. For a more updated view of my shoemaking, please see my latest posts instead.

After making a couple of loud shoes, it was time to do something a bit more classic.

For the second time, I’ve decided to recycle a pattern. Not to save time, but because it can be interesting to see how the same pattern can work with different design features. (See the austerity brogues Wik and Gotham for comparison). Aros is a plain cap toe oxford with a seamless heel, made using the same pattern as Upsala:

In the 12th century, “Aros” was the name of the small settlement that is now “Old Uppsala”. The brown 3-4 oz calf leather represents the soil of its looming viking grave-mounds.

I closed the uppers using my beloved 1910 Singer 29k, with Serafil 40s thread.

I used 1 oz black baby calf for beading, and lined the shoe with my favorite 2 oz veg tanned baby calf.

The insoles used were made out of a slightly fat Tärnsjö leather. I pre-made holes with a 70 mm Maeder welting awl, dipping the awl in wax in between holes. This is the second time I’m using this leather for insoles, and I really like it.

Toe and heel stiffeners in 5 oz latigo tanned leather were lasted with Hirschkleber and trimmed when dry. I put in some side stiffeners made with 3-4 oz veg tanned calf side before the final lasting. 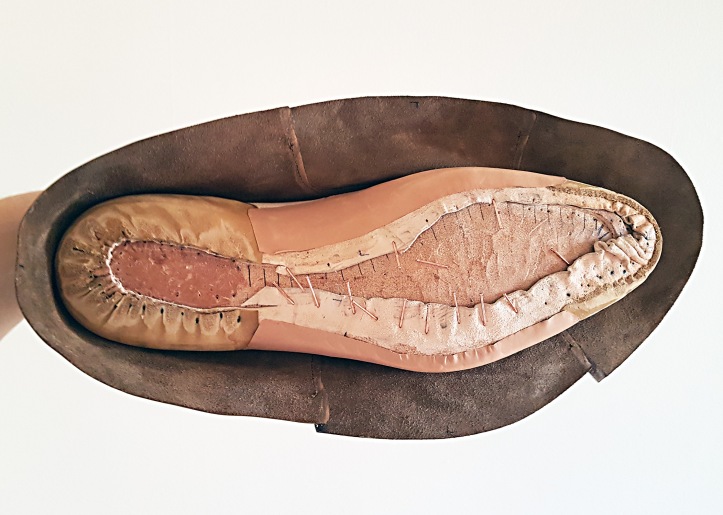 Once lasted, Aros was starting to take shape. 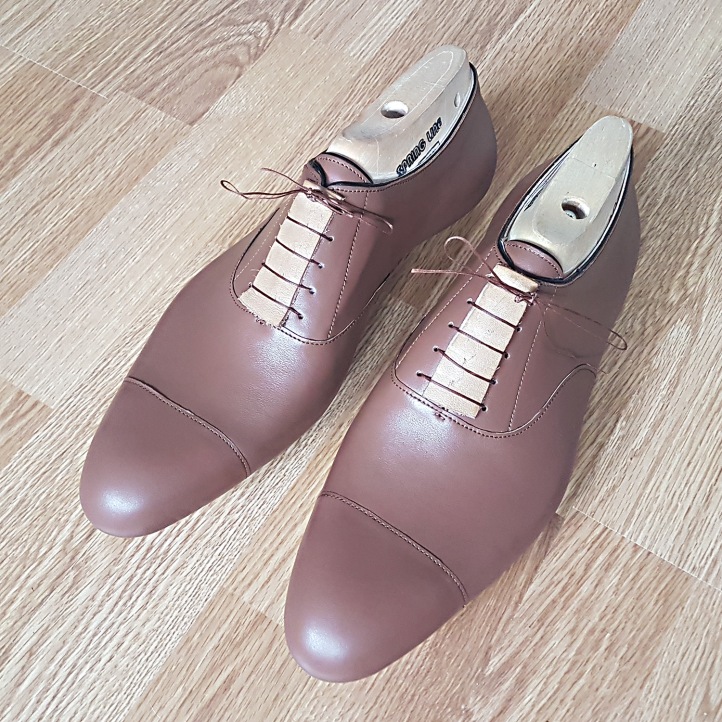 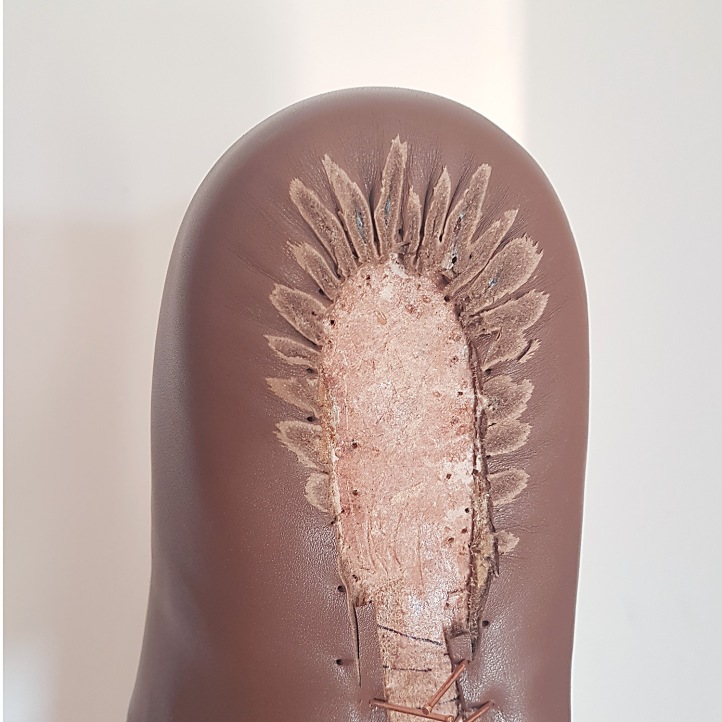 The shoes were hand welted with natural welting leather from Leather and Grindery. This time I pre-dyed the welting leather with Fiebing’s Chocolate Pro Dye. Unlike when I’ve used Fiebing’s Pro Dye in Black before, the Chocolate dye did release some pigment when I gave it a bath. It wasn’t a problem, just noteworthy.

I pegged a 3.5 mm Tärnsjö crust leather rand in an intact shape onto the shoes, kind of like a thin heel lift. Once secured with three rows of Blau Ring pegs, I made one careful cut along the inside of the rand, matching the line where I had trimmed the upper and lining leather. This produced a leather flap, or ‘lid’ if you will. (See images below.)

I taped up and cemented a shank onto the insole. At the waist, I moistened, hammered and pinned some thick Tärnsjö leather – the same as used for insoles. (Being hammered while moist onto the shank, the leather at the waist would dry into a shape perfectly fitting the top of the shank.)

Then I added a thin layer of cork filler around the shank bottom, to even out the surface there. 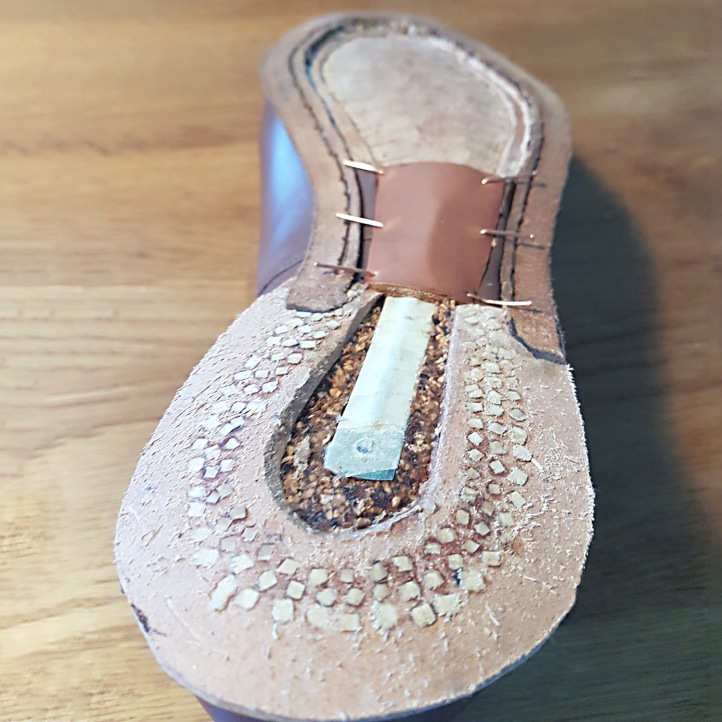 Before setting aside to dry, I filled the footbeds with canned cork. (I’d like to try tarred felt as filler, but do not currently have access to any – perhaps next time.) The leather at the waist was still pinned and moist when I put in the cork, but that didn’t matter.

When everything was dry, I returned the next day and cemented the “lid” and the leather waist cover. In the rightmost image below I’ve only lightly placed the parts on top – not actually cemented and hammered them in. 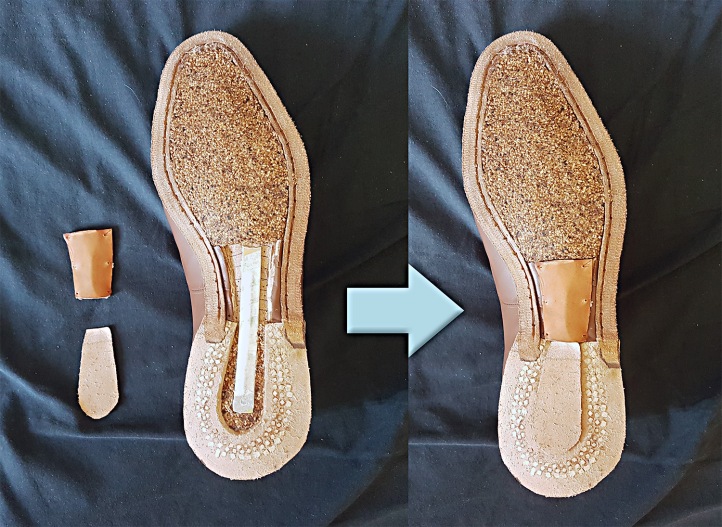 I thought this way was a good way to do it, as it took advantage of the leather ‘lid’ in the ‘rand center piece’. Next time, I may or may not consider going for an intact leather cover, following the whole length of the shank.

After trimming, it was time for outsoles. I prepared and cemented on some 9-10 oz hard butt outsoles.

The outsole preparation was the same as I’ve done for the past couple of shoes:

When the outsoles are in place, if one wants to do a traditional outsole seam, one needs to act quickly. The leather only stays moist at the core for so long. If work needs to be paused or postponed to the next day, the outsoles can be re-moistened with a healthy amount of water and the entire shoe put into a snug, air-tight bag, to be stored in a cool place.

Aros was only the second shoe on which I made the outsole seam in the traditional way, with a square awl – and the first shoe on which I think it worked well. (I will hopefully return at a later time to re-write my process step by step more thoroughly.)

It was sewn at only 7 stitches per inch. This was a walk in the park compared to the 12 spi I attempted on “Upsala”. The big trick I learned (thanks to expert feedback after Upsala), was to prick mark where each stitch would go before starting to sew.

A view from inside the leather flap of the closed channel outsoles: 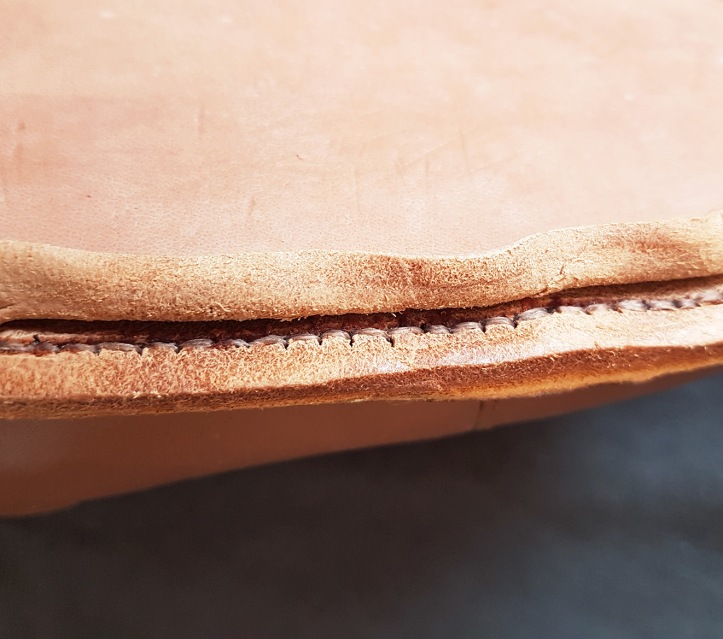 And from above, with the flap closed: 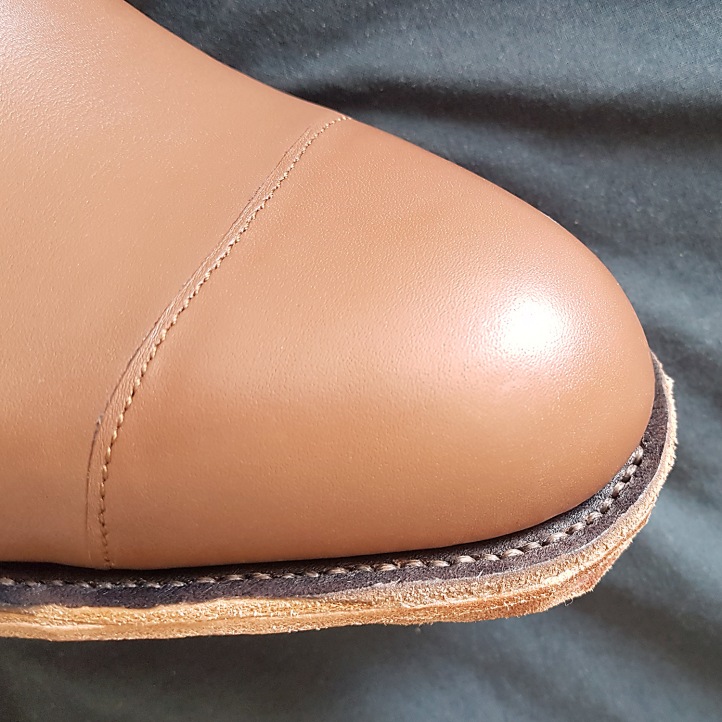 During finishing, I tried a (to me) new method of paint decoration, using some good old brown tape.

Polishing the heels and sole edges. 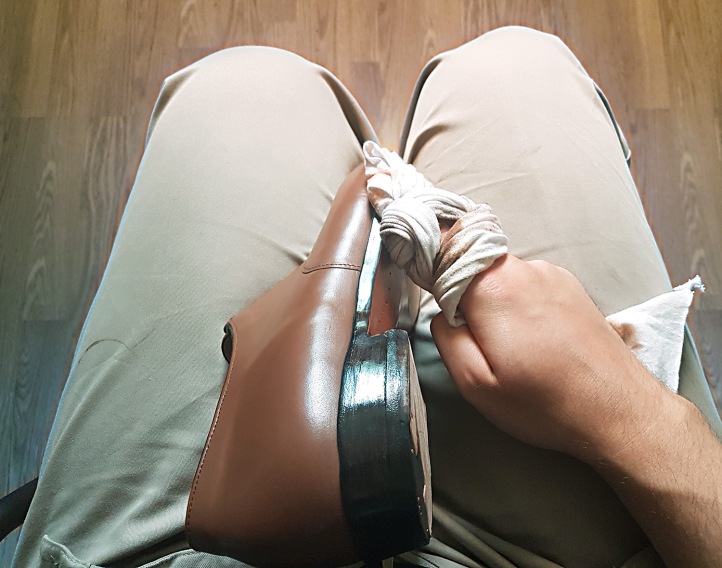