This post is a bit overdue, but here it comes. It’s been slightly more than a year since I started this project, so here’s my – hopefully first of many – yearly review. First, a little obligatory text – then comes a summary of my work thus far with pictures. (If you don’t like text, feel free to scroll to the pictures).

It was due to happenstance that I stumbled upon shoemaking as a hobby in the first place. Throughout my life I’ve always liked shoes, without knowing the first thing about quality or construction. Last year (2017) was the year when I first started to invest in quality goodyear welted shoes. My first was a pair of Crockett & Jones ”Drummond” in tan, and it was love at first sight. Eager to understand my longtime love for shoes at a deeper level, I started googling articles and blog posts about ”goodyear welted shoes”. In a couple of months, I also bought additional pairs of various brands (Vass, Carmina, Loake 1880, Yanko, Herring, Meermin).

When I bought my pair of Vass shoes as a mere consumer, I also bought the book ”Handmade shoes for men” as a complimentary read. This was truly an eye-opener. During a late night youtube session, I stumbled upon the youtube series ”How to make a shoe by hand” by Andrew Wrigley. This series made me, a complete and utter layman, think that handmade shoemaking is perhaps not strictly reserved for wizards and grand masters. Actual mortals can do it too. Seeing as how I was a moral individual, meeting said qualifications, I decided to give it a shot.

One year later, I’ve now made 8 pairs of wearable shoes: five for myself, and three as gifts within my family. (I also spent about 120 hours initially to make my first ’prototype’ shoe, which was terrible.) This makes my production for the past year 1 pair of shoes every six weeks. This is pretty nice considering that I also have a full time day job, a relationship, a golf handicap and a house to maintain. I’ve had no teacher and no education, which has been an obvious disadvantage. I wish I could study and learn from a master, but availability and pricing has kept me from it. I’m in my 30’s and already have other means to make an honest living. Becoming a professional shoemaker is a dream, but at the moment I can’t quite visualize how it could come to fruition. I would need to invest in proper training, and I would still like to spend around 80 hours per pair. I would hence need to charge around 3500-4000€ per pair of shoes in order to quit my day job, and at my current skill level that seems very far fetched. At the moment, I am content keeping shoemaking as a hobby.

In my journey thus far, I’ve mainly had great support and feedback from online connections through this blog and elsewhere. I’ve made rewarding contact with amateur shoemakers as well as world famous bespoke makers. I’ve also been criticized for displaying and writing about what I’m doing when I am an amateur and not a bespoke maker – what if someone would find this page and think that I am a master? (If you actually read this blog, you will of course know that I am not.)

In this year, I’ve had slighly more than 18.000 clicks on the blog, from just over 2200 unique visitors from all around the world. The average unique visitor has viewed just over 8 pages. In a grand scheme of things this is nothing, but I am also humbled by the numbers.

Without further ado, here are the shoes (as also shown in the Showroom, so there’s nothing new under the sun), and some small thoughts to go with them. Starting from the latest pair: 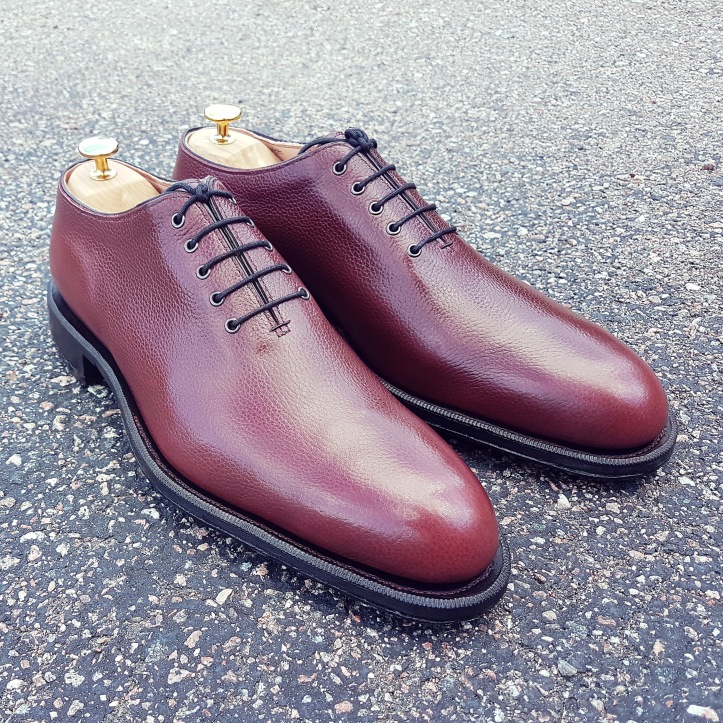 My latest finished shoe, Stockholm was made for myself. The fit of the Springline last 977 in F width is perfect for me. I was happy to make a wholecut as it meant less hand sewing… Sewing every seam by hand is traditional and cool and all, but it’s also nuisance. I would like to make this pattern again with different leather, preferrably cordovan.

This is probably my favorite shoe to date – I’ve worn it at every opportunity. Out of the three 100% veg tanned shoes I’ve made (two of which being for myself), this one is by far the best. It also has the nicest finished outsole that I’ve produced to date, with a bone-folded fiddleback. I am in love with the chocolate color.

This was made for my elder brother. I made him a couple of ‘bespoke’ lasts (heavily adjusted stock lasts) after a trial fitting. The fit may have been “ok”, but was far from excellent. It was the first pair where I used two needles to hand sew the uppers, which was a vast improvement from my previous ways of using only one needle. It was my second 100% veg tanned shoe to date.

These were made as uniform shoes for my father who’s an airline pilot. The fit was good (though the instep could have been slightly higher), and my father has sent me pictures from all around the world where the shoes have rested on cockpit dashboards and strolled on foreign ground. Due to the design and amount of broguing, the uppers have more than 1000 hand punched and stitched holes on each shoe. One of my favorite productions, simply because it gets such mileage by someone other than me.

This was my first English welted shoe, and I’ve given it heavy wear as one of my favorite shoes. Comfort wise, this is up there with Wik, but when I wear this to work I feel very bold. My next door neighbour famously helped me get the shoes out from their lasts, since I stupidly constructed this pair on solid lasts.

The images may look pleasing enough, but this was a terrible shoe. Made as an experiment and a learning shoe in january of 2018, this was my first attempt at a derby. The fit was great, but the make was not. It’s generally crooked, I used belly leather for the vamp, the facing wasn’t secured enough, etc. I only wore this a few times until I realized it was not to be.

This was a gift for my younger brothers 30th birthday. The fit was splendid, but I don’t think he’s used them since he got them 6 months ago. (Then again, he doesn’t wear dress shoes on a regular basis.) They were welted but not English welted, the uppers were hand sewn but only using 1 needle, and the materials used wasn’t spectacular. While I love the design of dark brown grain and smooth leather contrast, I’d like to remake them if I had the time, and if they would actually be worn. 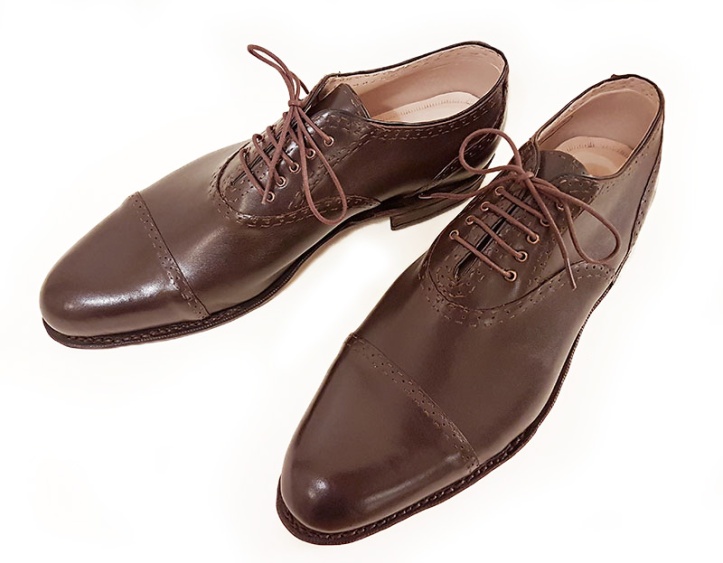 This was my first “real” shoe, completed in november of 2017. Again, this wasn’t English welted either and the upper leather isn’t perfect for shoemaking. I still remember the pride when I had finished this product. I do still wear them from time to time, and mostly leave them on the shelf because I’ve made so much better shoes since then.

Believe it or not, this sorry excuse of a shoe took me some 120 hours to make. As said; I’ve had no teacher, no education and had no experience going into this. I can remember I was satisfied when these shoes were finished, being my very first attempt on my own. I obviously cringe as I look on them now. They truly do look terrible, but they also marked the start of a beautiful friendship with a craft.

My initial goal, as posted on September 30th of 2017: “I’m going to make at least one pair of handmade shoes that fit me well. Then… I’m going to walk around in them.”.

This goal has been fulfilled. My goal for the coming year is simply to keep getting better and hone my skills. I also wish to keep up with a similar production pace. My ultimate goal is to sell the production of a pair of shoes for fair wage, but it is not a goal I feel like chasing too hard.