Like with Gripsholm, I made a combination piece of rand and welt in the same cut of 5 oz shoulder leather. Around the footbed, I cut off more excess than usual, as to make the holdfast of the insole clearly visible. Welting the holdfast was tricky and very time consuming, but it worked. I used a 40 mm blade Vergez Blanchard awl, two of the smallest size Prym curved needles and 1mm waxed polyester thread in black.

Penetrating the welt (5 oz), uppers (4 oz) and lining (2 oz) before you reach the holdfast is a lot of leather to go through. Once there, finding the hole in the holdfast with the tip of the awl reminds me of Luke Skywalker aiming for the thermal exhaust port of the death star.

It’s always important to never aim for valuable organs when working with knives and awls – at this step it’s crucial. It was very tempting to hold the shoe in such a way that I would be aiming towards my abdomen, but I had to find other angles and ways. When the awl found its way through all the layers as well as the holdfast, I held the layers fixed in their position as I withdrew the awl. Then, the curved needle was guided through the same path.

Going back through the same hole with the other needle turned out to be impossible. I just couldn’t find the angle with the curved needle on the way back, from holdfast to welt. Hence, I had to constantly remove the needles from the thread, push them in backwards (eye first) through the hole, and attach the other end of the thread back onto the needle before I pulled it out again in the right direction. This was tedious work, but it did the job. Here’s the result:

I slid a plastic shank in, removed a little more excess around the footbed and filled it with three layers of 2 mm sheet cork. 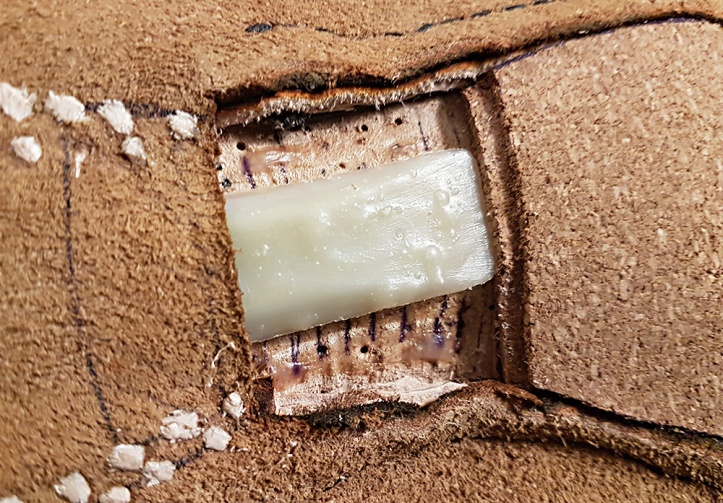 The shank was covered with 4 oz vegetable tanned leather (the same as used for uppers) – two slim strips on the side of the shank, and then one big one to cover the whole area and create a nice curvature for the outsole. I decided at this stage that Ericsberg will get a nicely bevelled waist, but not a fiddleback. 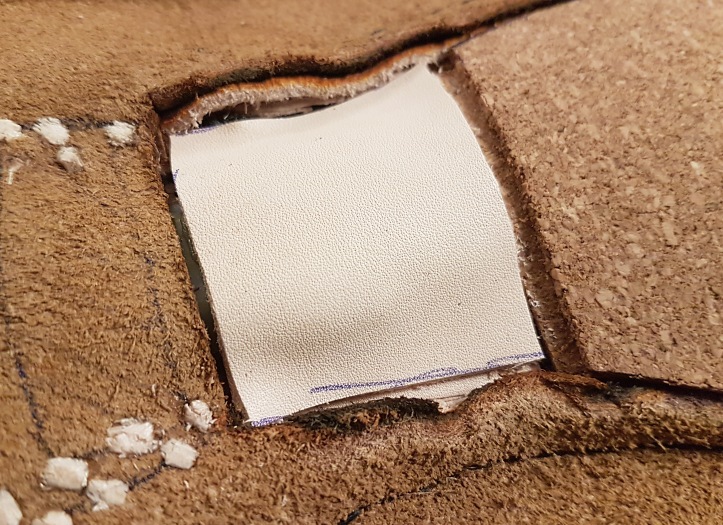 I also added a 4 oz leather layer to the toe, and a 5 oz tip to the waist for added curvature. At this stage, Ericsberg was ready for outsoles:

The outsoles were cemented on, excess was cut off, and I opened a channel to make way for closed stitching. I did this as described in my post The Outsole. I used 1 mm waxed polyester thread in the color ‘Flash jacinth‘, emphasizing the feeling that these shoes are on fire. 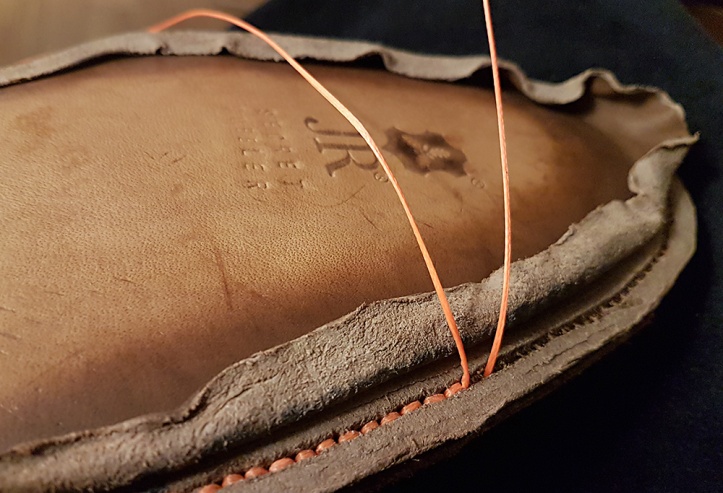 There is much beauty in a handmade shoe that is usually seen only by the shoemaker, before being perpetually sealed on the insides of the shoe.

As an experiment, I made the heel lifts from two layers of 12-13 oz calf butt – a leather I otherwise use to make insoles and outsoles. I imagine this leather will be easier to finish nicely, in comparison to my previous heels made with multiple layers of 5 oz leather.

With the top lifts in place, all that remains now is the finishing process and some polish.

Continue reading how the lasts wouldn’t come out »