With Gripsholm lasted, the bottom half of the shoe remained. As I consider this somewhat of an experiment shoe, I decided to try making a rand and welt out of the same piece, to avoid an unwanted overlap between the two. I skived and burned the edges, and dyed the grain side black. 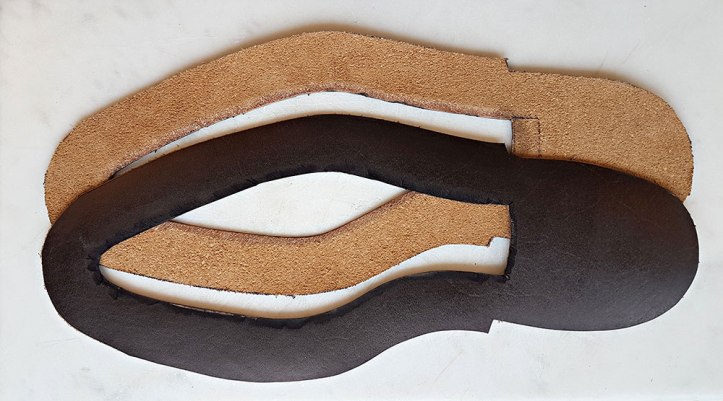 The pieces above are my second attempt, and the ones used. In my first attempt, I drew around the last bottom pattern on the nap side of 5 oz shoulder leather. I then added 10 mm margin into the shoe and 20 mm margin outwards, and drew around a large top lift to make the heel area. In other words, I tailored the pieces to precisely fit the measurements of the last bottom pattern. Because leather is slightly stretchy, this of course made the pieces too big: the welt part became too long. Realizing this, I made the pieces depicted by tracing around the ones I had already made, on a new piece of leather, but shortening them by ca 14 mm from heel to toe. The new pieces were made shorter by moving the heel forward into the shape, taking length off the welt.

The ink lines that can be seen on the rand by the heel display by how much I shortened the shape. Here I am fitting the rand and welt against the shoe by pulling it tight against the nails at the toe – it seems to be just right: 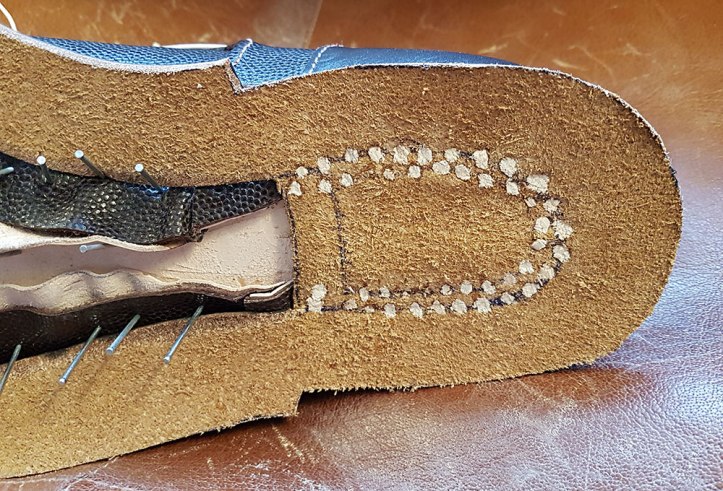 A plastic shank was slid in under the rand. (I’d like to use wooden shanks, but haven’t been able to find any. I also have a supply of metal shanks, but went for plastic in this case.)

Then the shoes were hand welted. While welting, I feared that the combination piece of rand and welt was still too long – I could easily have shortened it a couple of millimeters more than I did. However, it did work out in the end, without needing to slice up the welt in an improvised rescue attempt. Once the welt was knotted securely, I also hammered a couple of pegs into each side for good measure. 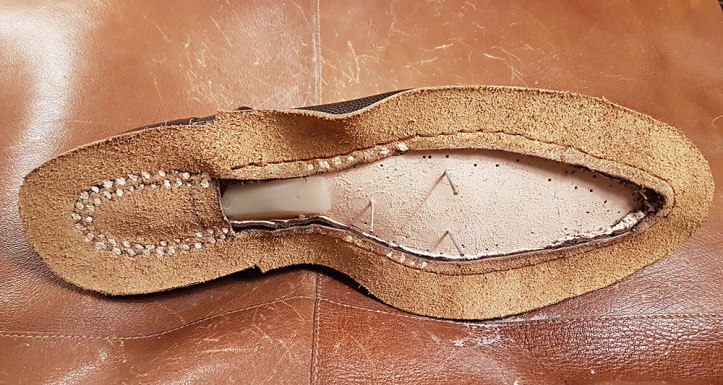 The footbed was corked with three layers of 2 mm sheet cork, with a fourth layer added to the toe area. I hid the shank under two layers of veg tanned shoulder leather – the second layer merely being a skived tip.

Outsole (or rather midsole) pieces were cut out from 12-13 oz calf butt and soaked in water for about 20 minutes. This is a fine choice for a regular leather sole. In this case, Gripsholm will get an additional rubber sole attached on top of this leather, making it a very sturdy midsole. Even though the lasts are quite elegant, this will be a shoe more suitable for countryside woodchopping than the office. 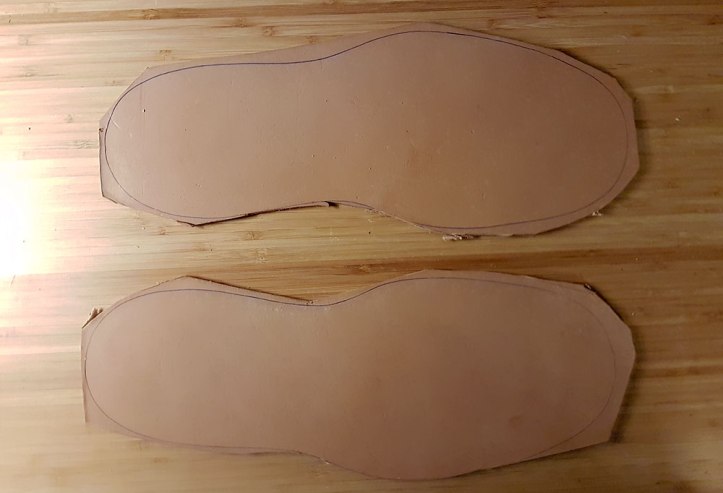 I applied a generous layer of Kövulfix contact cement with a toothbrush on both shoe and sole, and left to cure for 20-30 minutes.

These soles aren’t drunk, but they are hammered.

After hammering them into shape, they were left to sit for a while before the bulk of excess was cut off, in preparation for welting.

With rubber outsoles coming, I could have just skipped hiding the stitches on the leather “midsoles”. I did hidden stitches anyway, as practice for future leather soled shoes. It turned out so well that I almost changed my mind about making this into a sturdy forest shoe. I managed to open a flap without a single mistake, making it flawless.

I took a lot of pictures while opening the channels and welting, and will probably return with an ‘outsole masterclass’ post, focusing in on these steps in more detail.

For this pair, I used a new waxed polyester thread from ebay. This was listed as 1 mm, but felt ever so slightly thinner than the one I had previously used. It enabled me to make slightly smaller holes, and use smaller curved needles, which made things easier. This thread also felt more waxy to the touch.

Once welted, the channel was closed with contact cement and hammered firmly. The small dark dot at the ball is where I knotted the thread, making the color shine through slightly. While the surface is smooth, it’s also possible to see dots from the thread here and there, running around the sole like a skeletal spine. (The stitches are of course submerged in a grove underneath the flap, or they would have created big bulges all around.)

I then attached a second, horse-shoe shaped rand. But wait, what’s that – a fiddleback waist in the making? On a forest shoe?

It sure is. After all, this shoe is about experimenting things I haven’t dared to try before. On previous shoes, I haven’t had the courage to attempt a proper fiddleback, as it requires scraping on the outsole with a piece of broken glass. (I feared I would ruin the whole outsole if I slipped up). This will make for an interesting combination, a bit “out there” – I haven’t seen a fiddleback waist on a country shoe before…

After scraping the waists, they were sanded, moistened, hammered into shape, burnished, dyed, and sealed with gum thragacanth. The result is not perfect, but it’ll work. I also got some ideas on how to make a nicer fiddleback for my next pair.

The pegs and nails were put into place:

The Dainite Logger top lift was cemented on, carefully aligned to where it was previously traced. I used a healthy amount of contact cement and let it cure for a good while. To really hold it in place, I also pounded small nails through the lifts. First using a regular hammer, then to reach into the small holes I used an IKEA key, placing it on top of the nail and hammering on the key. 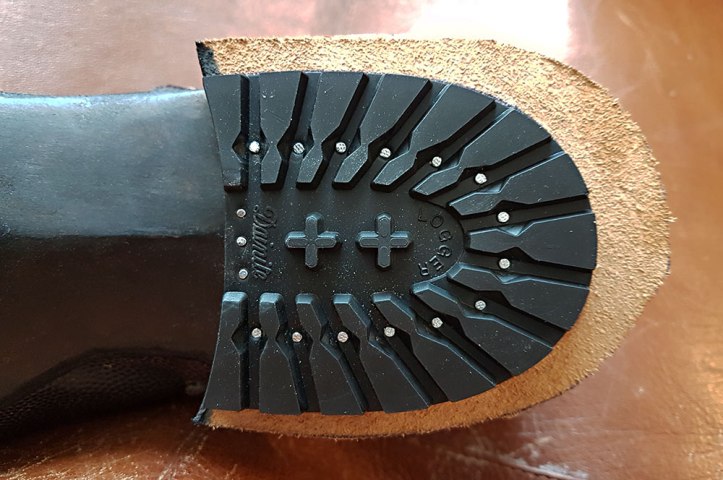 The heels were trimmed using drawing motions with a snap-off blade. (In reality, I mostly held the shoe aligned with the outsole facing the ground.) I trimmed it as tightly as possible with the knife, before sanding the heels.

I had previously dyed the entire outsole black, which was slightly unneccessary as it needs to be roughened up to attach the rubber outsole. After first aligning the logger soles on the shoe and marking where they would go, I sanded the leather gently as not to grind my way into the stitches. (I also roughed the rubber sole up, to take the cement better.) Some black parts are still visible on the leather, as I didn’t want to overdo it. Such a waste on a flawless channel… 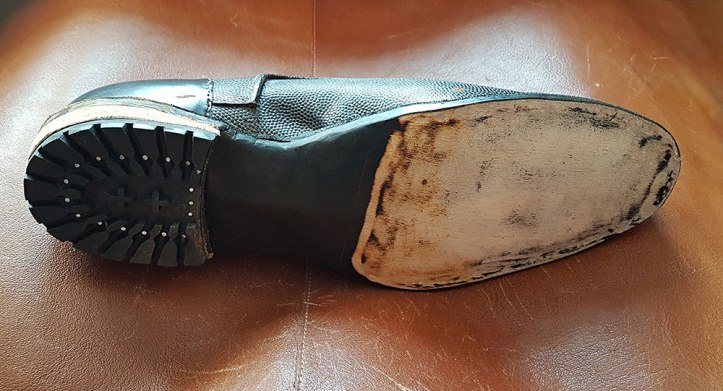 How this all turns out will be shown in the summary.