Disclaimer: The contents of this post describe my very first attempt at shoemaking. Do not attempt this at home before consulting a professional.

Finally, the moment I’ve been waiting for – the actual making of the shoe.

Perhaps the most important step (or so I have come to understand) is to powder the last before lasting begins. If one doesn’t, one may find it impossible to get the shoe off the last intact once finished. I used a perfume free talc (body powder) from Swedish Apoteket, and hope this will do the trick. I sprinkled it all over the lasts, as well as some on the insides of the linings.

I cut out and put some waxed polyester thread (later to be used for sewing the welt to the uppers and outsole) into the lacing holes and tied it up. If you don’t tie the facing up properly, the shoe will be lasted with a very wide v-shape in the facing as you pull the leather around the last, which would be errant.

I hammered in four nails in the middle of the dried insoles and pulled away the rest, to keep the insoles in place while have room for new nails all around the edge of the last. For the task of lasting, you will need (at least) a hammer, pliers and nails. I used two hammers (one regular household hammer and one big fat cobbler hammer), one cobbler pliers with a built-in hammer head, one needle-nose pliers for more dexterous pulls, and two gauges of nails. The tools all have their advantages for various situations while lasting. The cobbler pliers can both pull like pliers and hammer like a hammer in the same tool, but lacks the momentum of a regular hammer when hammering the nails in. It pulls well and sturdy, but lacks the dexterity of a needle-nose pliers for more gentle pulls in between nails late in the process. The fat cobbler hammer really has more momentum than needed, and mostly just looks cool (at least for the task of lasting, a household hammer will do the job just as fine).

There are many ways to go about lasting, but the main concept appears to be: tightly pull uppers and lining onto the last so that the leather is snug against the wood, and nail the leather into place on the bottom of the last. On and around the vamp, one will need to last on an angle back towards the heel, in order to avoid leaving any space or wrinkles between the wood and the leather. I basically did something along the lines of the following (not saying that this is in any way the ‘correct’ way to do it):

I later learned that the chunky nails I used from Bauhaus are terrible for the purposes of lasting. I would later find that Blackbird lasting nails is the only way to go.

I found lasting to be quite difficult on the first go, but if mistakes are made it’s easy to go back and re-do it. Seeing the uppers starting to look like an actual pair of shoes is very satisfying. It’s not John Lobb quality just yet, but getting there. 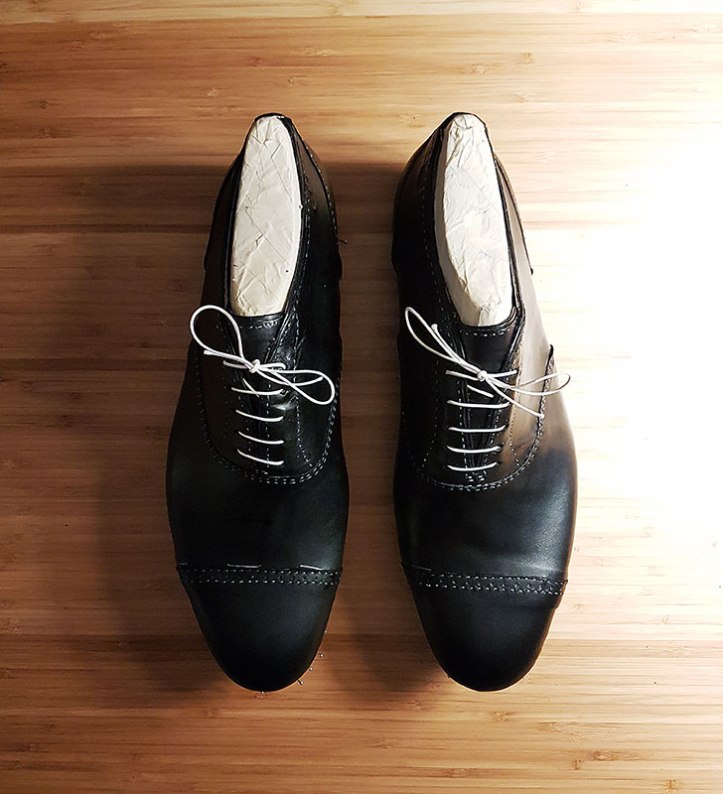 As you can see, I didn’t tie the knot on the left shoe tight enough (to the right in the picture above), so it was lasted the first time around with an open v-shaped facing. Luckily, I will get a chance to correct this in the second lasting.